The sheer rush of adrenaline you get when overtaking an opponent nearing the finish line is amazing. This post on best Android racing game has all the necessary ingredients to make your experience incredible, from fast cars to tight controls. Simply being the driver of your destiny (in the game) makes playing racing game a must for speed junkies.

You may not race on a real racetrack but with these 10 best racing games you will come as close as it gets. So download one of these best Android racing game and become a virtual Michael Schumacher right now.

Note: These racing games were tested on a Samsung Galaxy S3 smartphone running on Android version 4.3. They worked fine during our testing. Some apps in this list require large storage space. We recommend downloading the apps on a WiFi network. 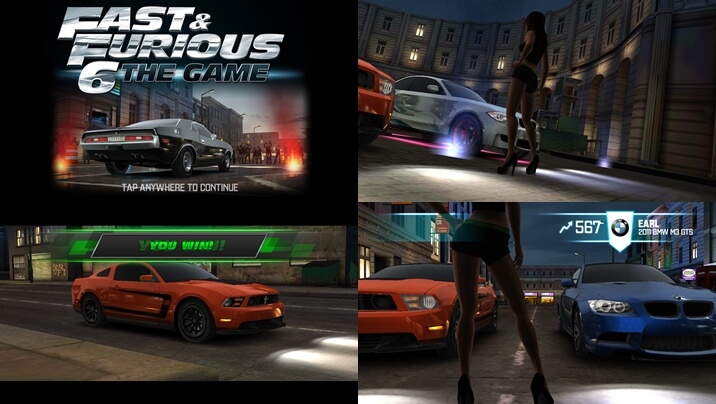 Let’s get something straight, you don’t get to play as Vin Diesel or Paul Walker in this game. We were disappointed when we saw that too but the game has some great redeeming qualities. The graphics for one are top notch and the controls are simplistic. There are cameo appearances from the characters from the movie though, but none of them are playable in any way. Either way you will get a slick looking game with solid mechanics and varied gameplay. The game also runs quite smooth even on old hardware; this is a big plus in our books.

Notable Feature: The game has 1080p high definition graphics, which will really shine on latest smartphones. 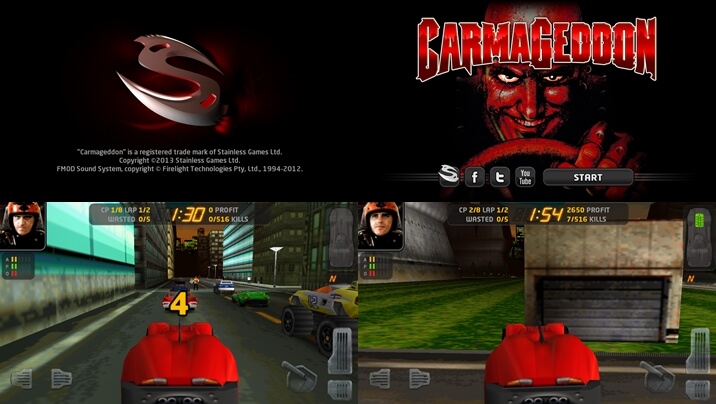 Carmageddon has a rating of 4.8 on the Google Play Store and it shows. So why is it listed so down in the 10 best android racing games? For one the game is a port of an old video game and secondly the controls are a little wobbly. If you are one of the lucky gamers who got to play the original, Carmageddon is a perfect for you. But if you were born somewhere after 1999, this will be a hard game to love completely. There are cars, there is chaos and there is carnage in Carmageddon and it’s an absolute blast.

Notable Feature: Carmageddon never stresses you to win the race. With wide open tracks you will find yourself trying to put the hurt on other racers more often than doing a straight run. You will essentially turn this game into a last man standing match to earn more points. 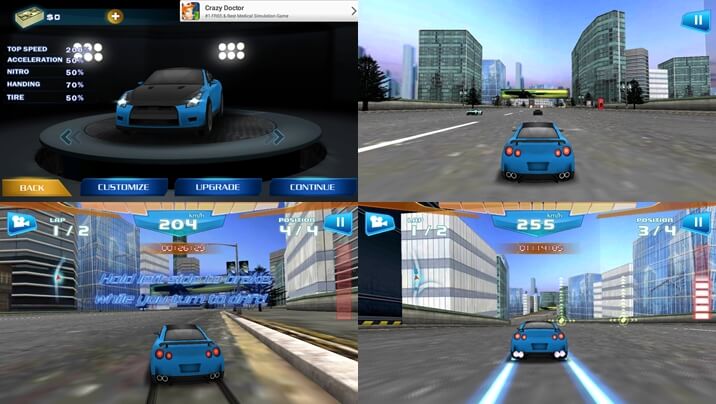 Fast Racing 3D is among the lightest one on the 10 best android racing games list. It comes in a relatively very small size and runs buttery smooth on almost any device. Although another game on the list does everything better than Fast Racing 3D, but comes with almost 20 times the size. The best part about Fast Racing 3D is the tracks, they give you ample room for maneuvering your car and are not punishing. You will instantly get into the game and have a good time.

Notable Feature: Fast Racing 3D has some watered down textures and the background scenery is definitely down scaled. The tradeoff is that the game runs very smooth on almost any device, even old ones. 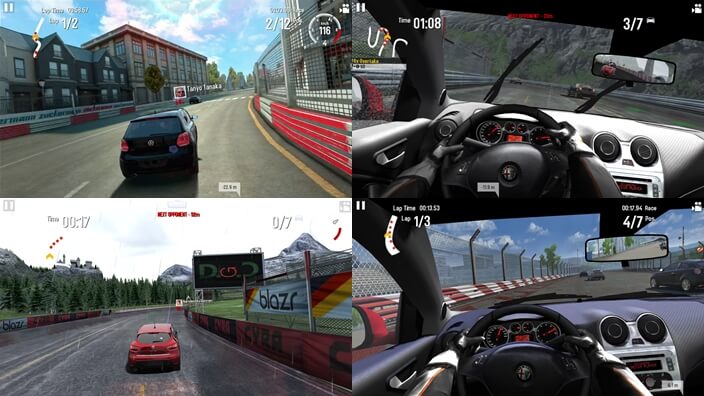 GT Racing 2 comes from the house of Gameloft, who are undoubtedly the kings of smartphone games. The game seeps of quality and sleekness, whether it is the race tracks or the cars themselves. The only reason this amazing game is a little bit behind is that the IAPs are somewhat aggressive. Not that we are complaining, the gorgeous looking game more than makes up for the grind you will have to do. We would have appreciated if Gameloft were to loosen the in app purchase noose a bit.

Notable Feature: There are 13 real tracks in the game including real Mazda Raceway Laguna Seca. The track details are astounding in the game. 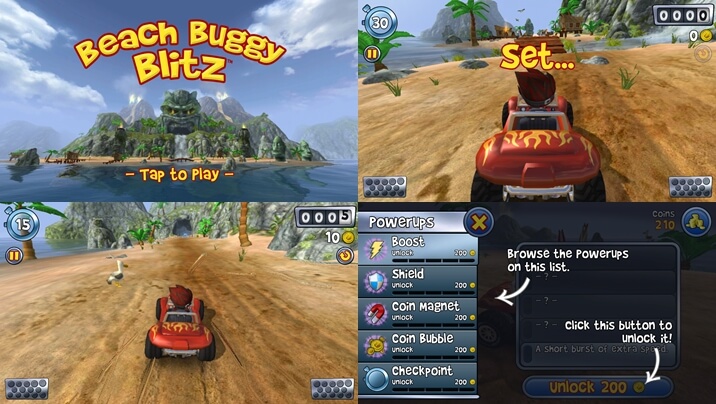 If you are tired of pressure inducing races, Beach Buggy Blitz will relax you in more than one ways. The game takes place on a tropical island with lush greenery and blue beaches. Also there is no pressure of coming at first place either; you just need to keep going until time runs out. The game may be an endless runner in spirit but the driving mechanics are solid. The tracks are randomly generated so you will have to be alert in order to post the high score on the board.

Notable Feature: The coins you collect with your skillful driving can be used to upgrade your ride. This adds a solid incentive to drive better and faster. 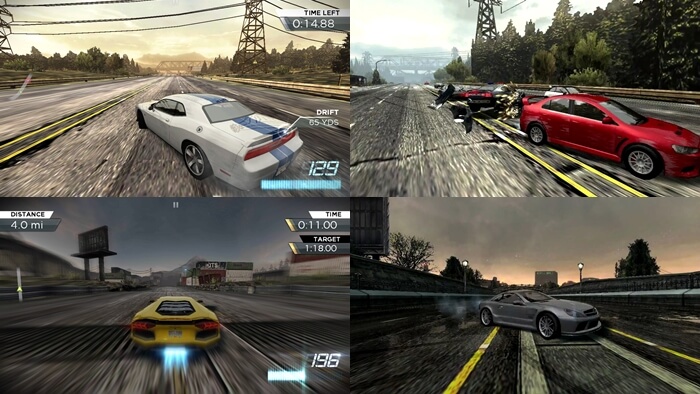 The need is there

Need for Speed: Most Wanted for Android is a great game to play if you are not familiar with the console version. It has great graphics, a pumping soundtrack and amazing cars. But if you have played the PC and console, the android version will feel lacking in content especially if you consider the price. Need for Speed Most Wanted is a great game but fans of the series will feel disappointed by the lack of much needed open world. This is the only reason; the game is not topping our 10 best android racing games list.

Notable Feature: The handling of cars is very responsive, even console like. This is a very hard thing to nail on a mobile game, as the hardware limitations never allow a full physics engine to run. 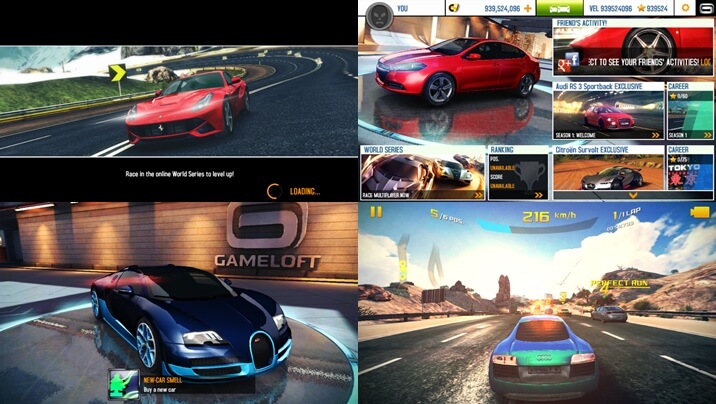 We have listed this amazing game in the top 10 multiplayer games on android article too and we are doing so again. The reason is Asphalt 8: Airborne is simply an incredibly balanced game. Although it is a free title, it never feels that you are not getting VIP treatment. The licensed cars look and sound great and the sheer number of options at your disposal is staggering. Drive, ram, drift, speed and win in this absolutely gorgeous and breathtakingly optimized game. Surprisingly Gameloft is behind this title as well and yet the IAPs are kept on the low side.

Notable Feature: Asphalt 8: Airborne features real world locations, all of them have unique characteristics and charm. The shortcuts and multiple pathways keep every race interesting. 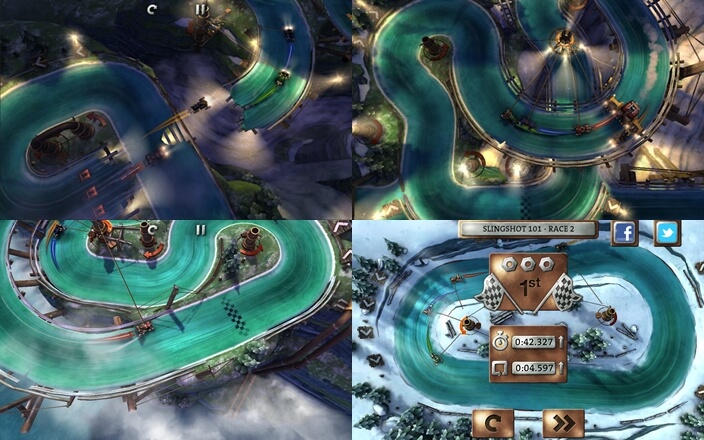 The most unique android racing game we ever encountered, Slingshot Racing is a blast to play. It is a top down game with miniature cars and a very unique driving mechanic. Your ski comes equipped with a slingshot which attaches to special poles around the track. You simply need to tap any corner of the screen to launch the magnetized slingshot and increase your speed as well as cover the corner. This physics based game uses only one mechanic to build an environment which rewards timing and skill.

Notable Feature: Slingshot Racing won our hearts by being incredibly accessible all the while requiring skill and masterful timing for success. 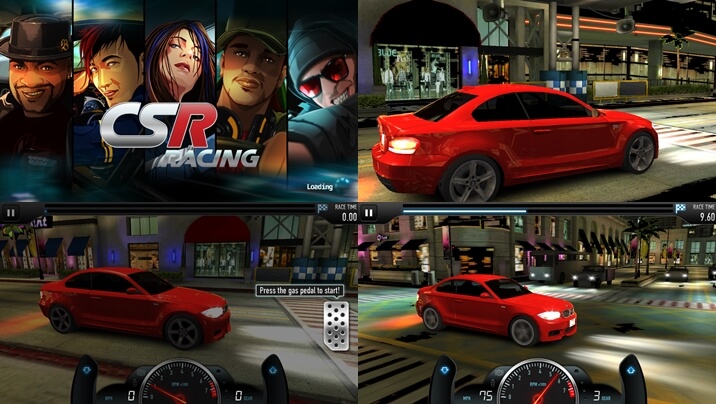 The best kind of drag

CSR Racing combines great graphics with solid gameplay to deliver the ultimate drag racing experience. The car models are made with great care and are incredibly detailed. Winning races earns you money to spend on upgrading your car and making it better at winning. The gameplay is not overly complicated and to be honest it is quite easy to get into. This is where the game gets to you, shifting gears at the right moment becomes crucial for that microsecond lead. 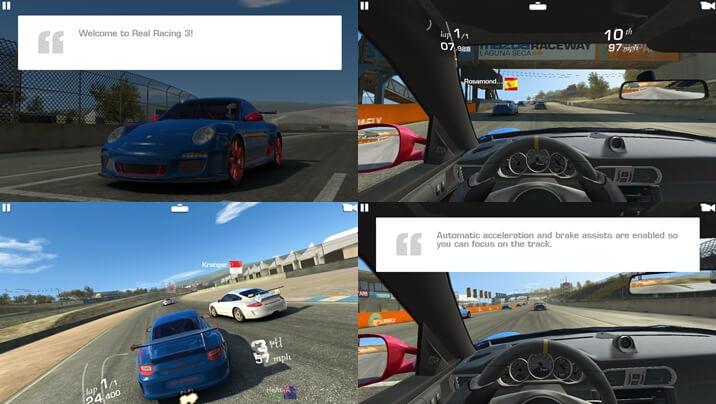 This is it folks, the best android racing game available. Real Racing has shown what the Android platform is capable of delivering and that too without any cost. Real Racing has the best looking graphics we have ever seen in any Android game. The cars are incredibly detailed and the way the light shines off them is amazing. From the front bumper to the spoiler, the cars exhibit amazing life like characteristic. The tries leave marks on the road and remain there for rest of the race. The sun glistens off the car in a very realistic manner. The best part of Real Racing is the dashboard/driver view, which immensely adds to the experience. In short, Real Racing is as real as it gets on a mobile platform.

Notable Feature: Despite being a smartphone game, Real Racing is quite hard. Especially once you get your in-game carrier rolling you will have to try hard to come at first place.

These were the 10 best android racing games we came across in our extensive search for racing satisfaction. We strongly recommend Real Racing as it showcases the power of our beloved platform. Amazing graphics merging with solid and addictive gameplay makes these games a must have for any racing fan. You can even check out the top strategy games or RPG games if your get bored of the racing games.

Racing cars while traveling in your daily mode of transport never felt this great. If you have another game which we missed or any questions about the games, feel free to honk the horn in the comments below. And remember we are always up for a good race, happy racing and God speed!