Well you install one of the 10 Best Android RPG games in your Android device of course!

The 10 Best Android RPG games are all about exploring the wonderful world of fantasy. And not only magical and medieval fantasies either; you get to enjoy a helping of futuristic science fiction as well. All of these games are epic adventures waiting for you to embark on. So fasten the armor plates, charge your plasma gun and get ready to go on some of the best role playing adventures you have ever experienced.

Note: All of the games were tested on a Samsung Galaxy S3 running a custom ROM based on Android 4.3. Each of them ran smoothly and performed well during the testing.

Warning: Many of the games are quite big in size, so we advise that you use WiFi to download them. We know downloading 1 GB games over the network can be a pain in the neck as well as the wallet (if you don’t have unlimited data). 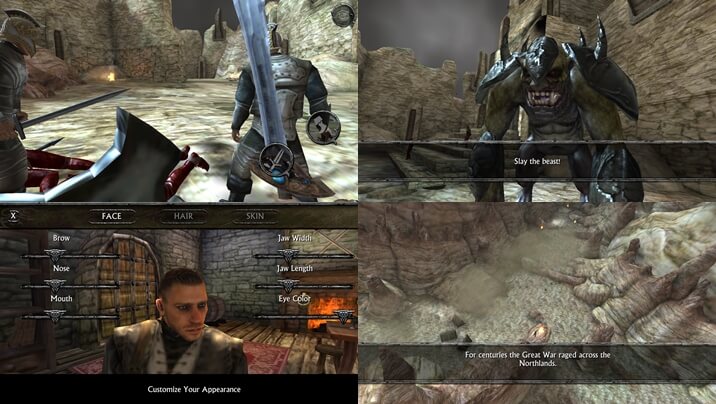 Among the 10 Best Android RPG games, only Ravensword: Shadowlands comes close to capturing the feel of Skyrim. The Elder Scrolls series has be the benchmark for western role playing games and as it is not on Android, we get to play Ravensword: Shadowlands. The game has fully 3D graphics which almost rival consoles. The gameplay is great and you can switch between first and third person views. The controls are OK on a touch screen but as with every first person perspective game, it plays best if you plug in a controller.

Notable Feature: In Ravensword: Shadowlands you can either use bows for sniping enemies from afar or make things up close and personal with swords or axes. 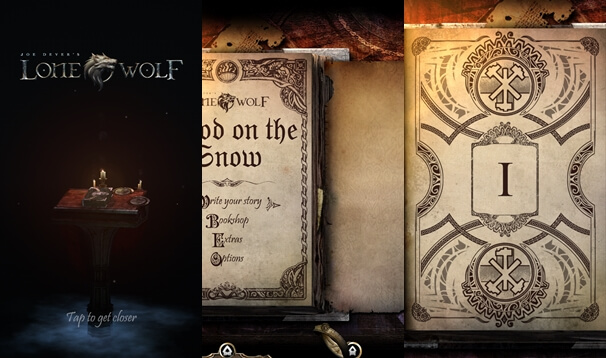 Write your own story

Joe Dever’s Lone Wolf is The Witcher on smartphones. And this is the highest compliment any RPG can hope to get in this modern day. Just like The Witcher, Joe Dever’s Lone Wolf is an extremely well written game and has some of the best visuals we have seen in an RPG. The mechanics and the protagonist style all resemble the aforementioned title. The game delivers an epic story in the form of storybooks and has a unique formula of keeping players engaged.

Notable Feature: You can use Kai Disciplines to dominate your foes. These magical abilities have great impact and flair. 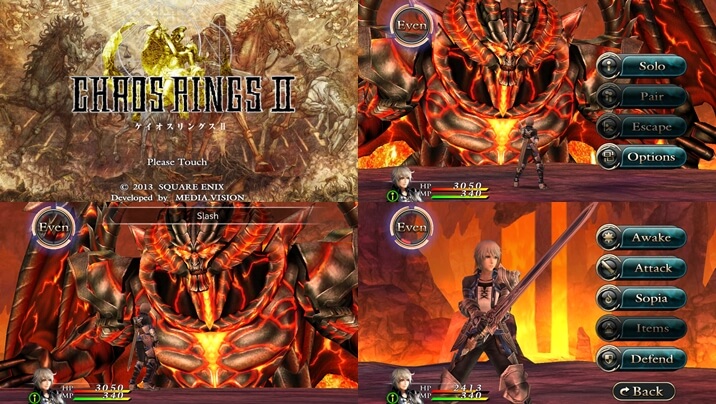 There is no doubt that Square Enix makes some of the best role playing games out there. And thankfully they are releasing their legendary games on our beloved platform; Chaos Rings II is among them. The game is almost the same as the other versions which means you will get the same great graphics, story, combat and characters which were included in the original. Obviously the graphics are enhanced for the HD and Full HD screens of today’s hardware but they retain the great design. The game has a great strategic battle system which takes a while to learn but is immensely rewarding.

Notable Feature: Chaos Rings II is available in multiple languages including Chinese, German, French and Spanish making it the most robust offering in the 10 Best Android RPG Games when it comes to languages. 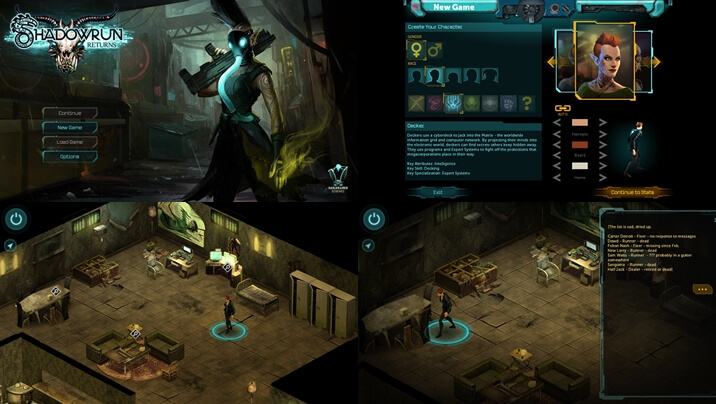 The year is 2054 and magic has returned to the world. ShadowRun Returns has guns and magic, what more can a role playing fan wants. ShadowRun Returns has a great story which mixes magic with machines. You are a mercenary who lives day to day running shady gigs for suspicious individuals. Exploring the world of ShadowRun Returns in the top down view is a treat to the senses. Creating and customizing your character and taking part in strategic turn based combat spells awesome. 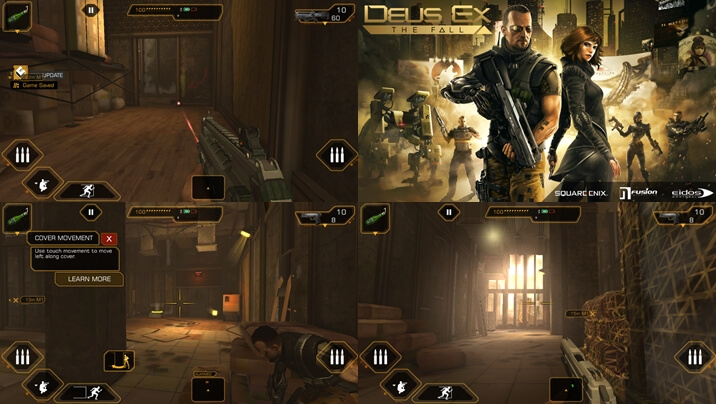 Play as you please

Deus Ex: The Fall is the only first person shooter RPG in the 10 Best Android RPG games. It is the most beautiful and amazing FPS we have played in a long while and has excellent RPG character progression. The graphics are almost console quality and will remind you of the latest Dues Ex released on PC and consoles. The game has the same great gameplay which made the series famous. This means that you can be silent and sneaky or you can be loud and crude. Dues Ex: The Fall also gives you the option of playing through the meaty campaign without killing anyone.

Notable Feature: Deus Ex: The Fall demands that you take your time with the game. To be honest you will want to spend time in this sci-fi world. 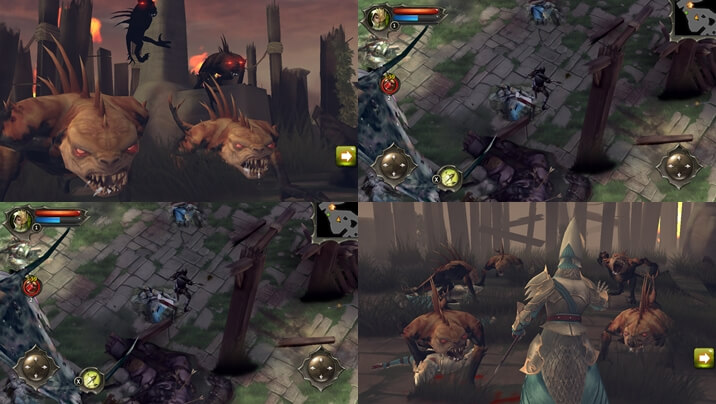 Dungeon Hunter 4 can easily replace the loot-and-progress game void you may feel. The game is in the same vein as the legendary action RPG Diablo and allows you to live out the ultimate power fantasy. This is the standard kill, loot and upgrade trope which works really well. The only down side to the game is that it is free to play and has a lot of micro transactions, which sometimes feel forced. Overall the game is a great RPG if you are short on cash and just want to have an enjoyable experience.

Notable Feature: One of the best dungeon crawler games on the 10 best Android RPG games, Dungeon Hunter 4 is highly addictive and alluring. 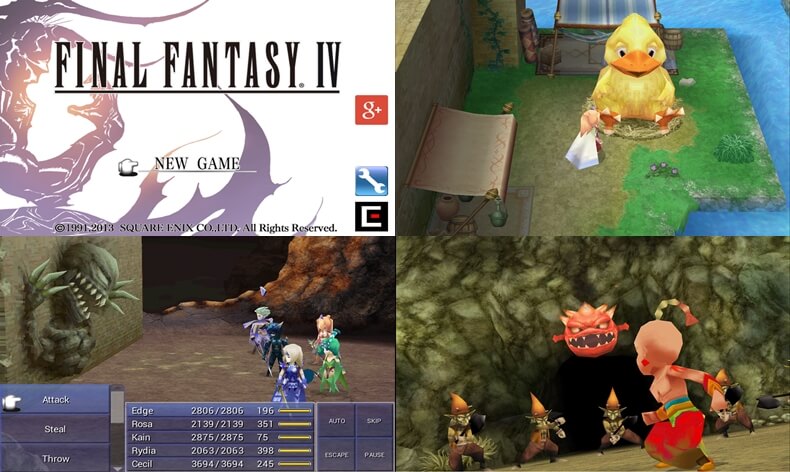 Not the final one

This is it folks, the best JRPG of all time is available on Android. Yes this game is from Square Enix’s legendary turn based role playing game series and is as authentic as they come. Re-released by the same guys who made the original, Final Fantasy IV has the best characters and gameplay in any RPG every made on any console. The graphics are a bit outdated but if you have played the original game, you will appreciate the HD paint the developers have given the game. The gameplay and the characters remain the same in this great re-release which defined a lot of features of future Final Fantasy games.

Notable Feature: They say nostalgia is a powerful emotion and it is especially true in the case of Final Fantasy IV. It does bring back a lot of memories for relatively old gamers. 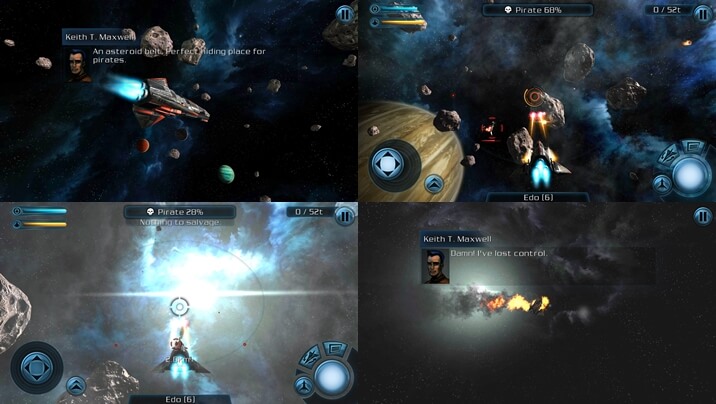 Imagine you are a captain of your own ship who hunts down space pirates and collects bounties. You will get Galaxy on Fire 2 if you materialize that thought. The game may not feature a human protagonist or feature standard RPG elements, but it is a role playing game through and through. You do missions and gain experience and money, you upgrade and you tackle the next challenge. The beauty of Galaxy on Fire 2 lies in the ship progression which is immediately felt in the battlefield. The controls are great for a space based video game too.

Notable Feature: Galaxy on Fire 2 spoils you for choice when it comes to space ships. There are over 50 ships you can acquire and play with. There is no other game in the 10 best Android RPG games list which comes close to the vastness and complexity of this title. 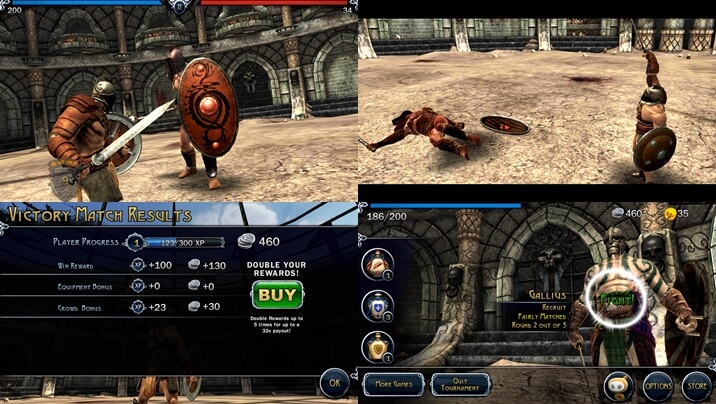 Think Gladiator or the TV Show Sparticus, Blood & Glory is just that (except the explicit drama though). You fight in the arena for fame, fortune and for the entertainment of the masses. You are an entertainer and more than that you are a survivor. The mission is simple, fight till either you die or your opponent falls. The controls are simple but will require your full attention if you want to live and fight another day.

Notable Feature: The battles are quick and simple. This makes Blood & Glory a perfect candidate for short bursts of gaming. 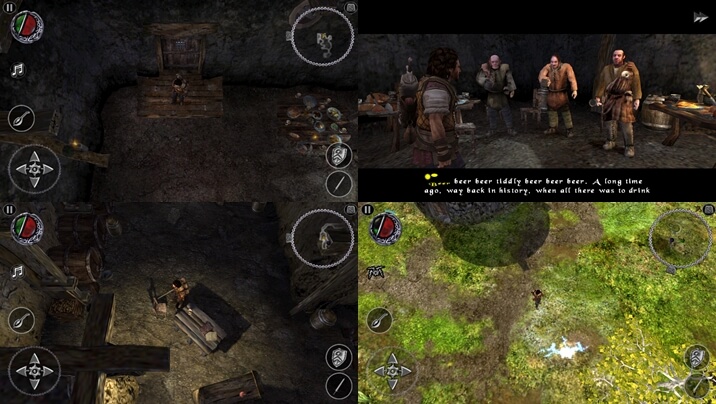 If you are looking for a reasonably priced and amazingly long RPG, your search ends right here. The Bard’s Tale is the best of the best in multiple ways. For one, it casts a hesitating hero who is not fighting got glory or honor but for money. The protagonist, the bard is an unlovable character who comes off as cocky and arrogant. The Bard’s Tale is an extremely well written RPG and is one of the most hilarious games we have ever played. The humor adds a ton of charm to an already excellent dungeon crawler game. Apart from usual classes like ranger and melee master, the Bard also has a flute which can be used to summon allies.

Notable Feature: The Bard’s Tale never shies away from addressing mature topics. There are a lot or side quests which will prove that the game is a bitter reality-based pill coated with a layer of comic-sweet.

Thus ends our journey of exploring the 10 best Android RPG games and we must depart on our separate ways. Fellow adventurers, if you may require our humble assistance in any of the quests you may partake, feel free to send an owl in the comments below. We are forevermore, seeking to guide our fellow Androidic brotherin in the time of need. Feel free to try out our favorite strategy games, and check out how to play your favorite Android games on a PC.

May the winds guide you and the skies be ethereal blue. Until we meet again respected sire/madam!