No matter how hard you try, you end up being late. If this sentence sums up your daily dilemma then you are in need of an alarm clock. Sure there is a stock app on almost every Android smartphone which allows you to set alarms. They are OK but some people need some extra “oomph” in their alarm clocks. If you sleep blissfully through any kind of alarm tone, you must get one of these alarm clock apps.

Note: All of the best alarm clock app for android list were tested on a Samsung Galaxy S3 running on a custom ROM based on 4.4 Kit Kat. Some were tested on Asus MeMOpad 7, to check landscape mode compatibility. The apps were also tested in real life situations like sleeping and napping. All of the apps have the ability to wake a heavy sleeper (a bit harder on Mondays though). 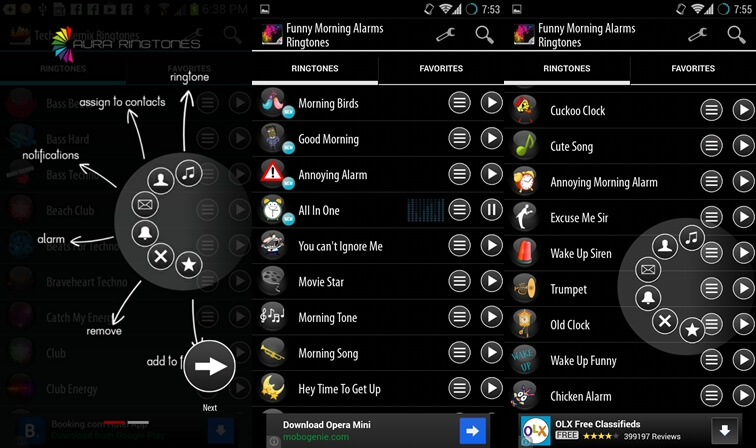 Are you tired of the same old “trrin trrin” of alarm clocks? So you need something much more annoying to wake you up? Well look no further than the Funny Morning Alarm Ringtones. The app has one of the most obvious names we have seen in a long time but it stands true to the core. There are a lot of funny alarm ringtones which range from insane to creepy. There is nothing like a guy telling you to wake up in the morning, it was downright terrifying to hear. Well at least the app managed to wake us up in time.

This is the best alarm clock app for android when it comes to variety of tones available. There are a total of 57 available in this free app. 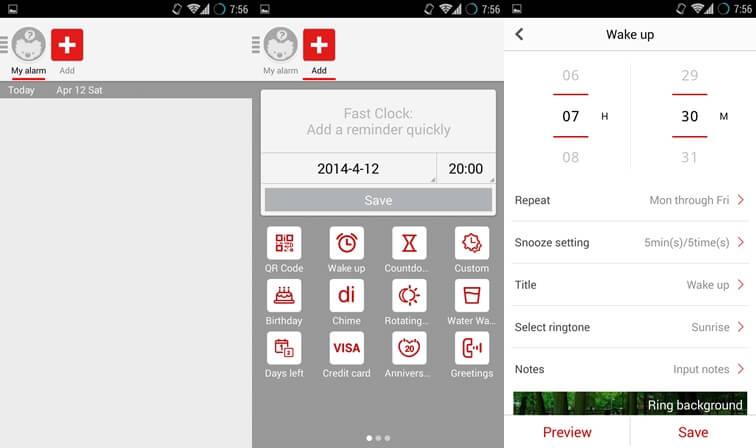 Alarm Pro has one of the best interfaces we encountered during the extensive testing of alarm apps. The app has a very clean and suave look about and works quite well. The red and white color combination of the app makes it one of the most pleasing ones to use. It is not just a app to wake you up though, it can be used for various other needs. For example you can organize your week by using the built in calendar. You can also put in things you need done. The app will automatically alert you when the time is right.

You can record your own personal ringtone to wake you up. This makes for a great way to wake up. We will take yelling of mom over any alarm tone any day. 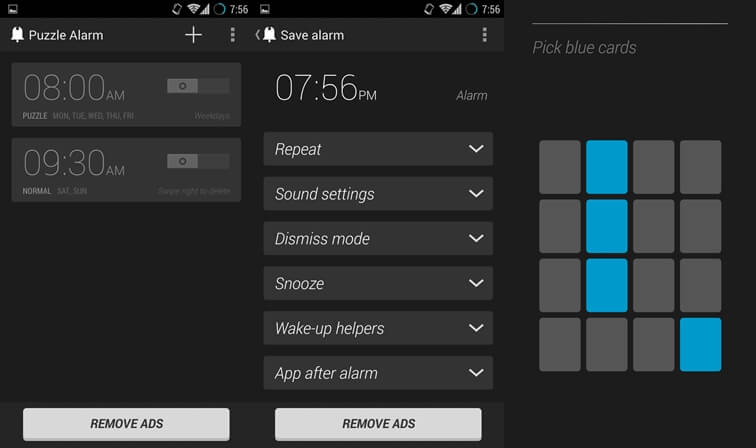 Sometimes you need to bring in the heavy artillery. Puzzle Alarm Clock is the tank of the best alarm clock app for android army. It is a simple alarm clock with good interface and a lot of features but one thing sets it apart. You set the alarm just like usual by navigating a clean and simple interface. The alarm rings at the right time but instead of a snooze button you are met with a puzzle. If you fail to solve the puzzle, the alarm will continue to ring. So say bye to pressing the snooze button or stop button and going back to sleep. This is a great feature which makes Puzzle Alarm Clock the best alarm clock app for android when it comes to waking you up.

The puzzles come in three difficulty levels which makes them a bit tricky to solve while still dozing. So it becomes hard to go back to sleep after solving a math equation. 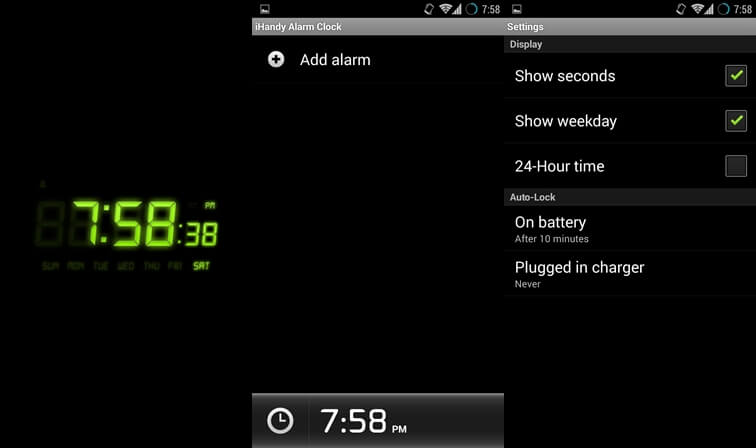 Its a free alarm

Another great free alarm clock app, Alarm Clock Free is a very competent app. If you like old school LCD displays, you will love the clean and simple look of this app. The gorgeous green LCD style display will gel well with those who appreciate orthodox looks. The app also supports tablets as well as smartphones and to be honest the clock looks very pretty on either device. There are also multiple alarm sounds included in the app, so there is a lot of choice for you.

Did we mention that the app looks so pretty? Well you need to experience it to know how beautiful it looks. 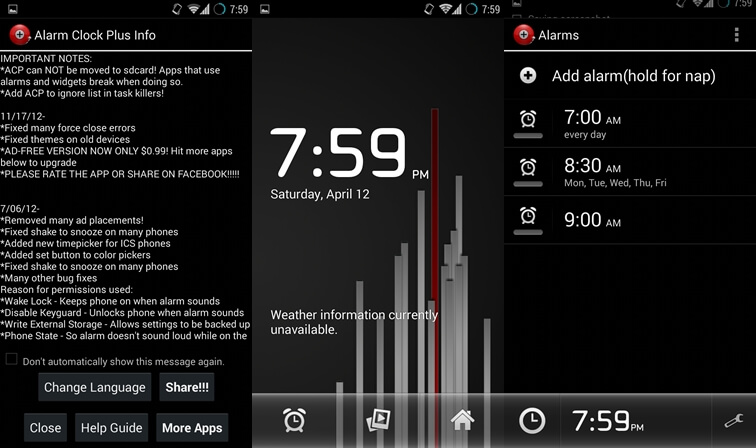 If you are looking for a plain and simple alarm clock app, then Alarm Clock Plus will be the best app for you. This is the best alarm clock app for android when it comes to simplicity and usability. There is nothing extraordinary about this app, yet it is fully reliable and gets the job done. Don’t let the minimalistic looks fool you though; the app has some great features too. For example you can set an indefinite number of alarms with this app. You can also use your own music tracks to wake you up.

You can attach apps with alarms. For example if you want to listen to the radio as an alarm tone, you can combine the radio app with the alarm. 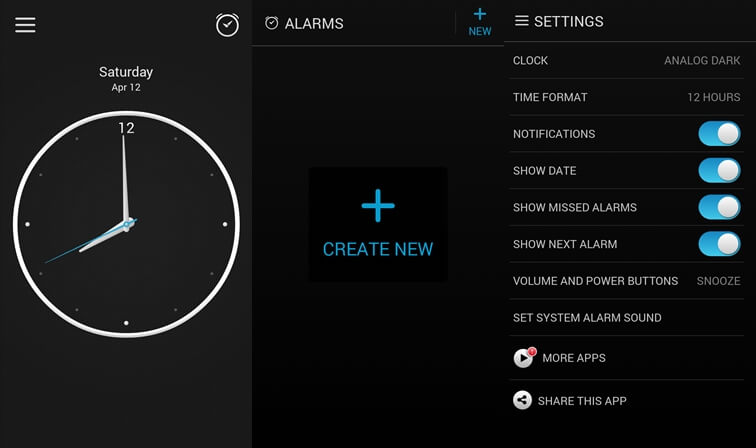 If you really loved the simple Ice Cream Sandwich color scheme, then you will absolutely love Alarm Clock. It is a very simple alarm clock application which uses a good looking clock. This is the best alarm clock app for Android when it comes to intuitiveness. For example, if you are chatting on the phone the app will automatically reduce the alarm sound so you are not disturbed yet know that it is time. Another example is that the app automatically adjusts the alarm if time zones are changes. If you travel often, this feature will save you a lot of time calibrating the alarms according to the destination time.

This app is built from ground for tablets. This means you can use this lightweight app as a night stand clock as well. 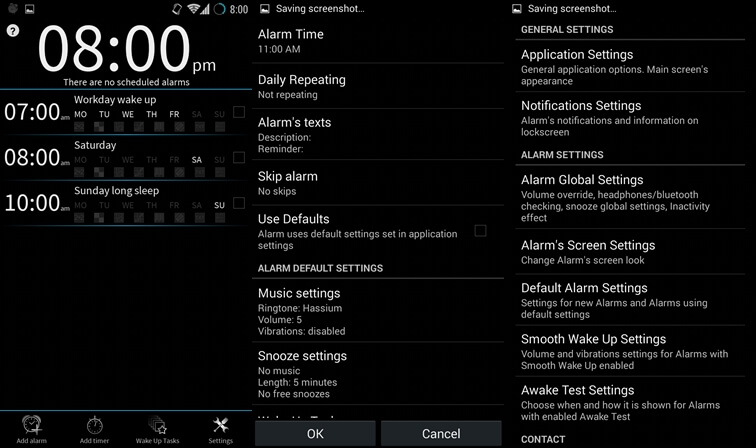 “I Can’t Wake Up!” you say every time you get late for work or school. If this is your excuse often, you need this app you effectively make you an early riser. This app has around 3 to 4 ways to make sure you wake up at the right time and stay awake. The Smooth Wake up option will dim the screen and rise the volume so you can wake up pleasantly. By using ringtones, music files and shoutcasts you can customize the way you wake up. That’s not all though there is an Awake Test which will make sure you are fully awake before completely disabling the alarm. So what happens if you fail the Awake Test? The alarm is back on dude!

Do you like to press the snooze button often and then go into a coma? Well the Snooze music feature will play music of your choice during the 10 minute snooze you like so much. So if you feel like going back to sleep, select a thumping song for this feature. 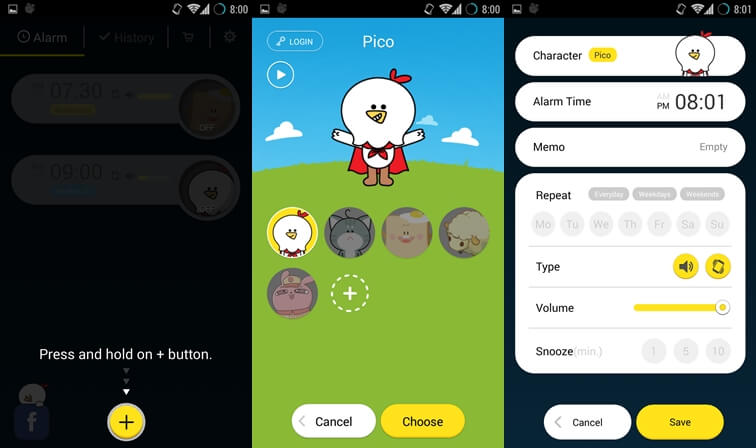 AlarmMon is the best alarm clock app for android in the fun category. If you have kids who need a great alarm app, this is the best one you can get. AlarmMon as the game suggests features different creatures which are funny and whimsical. The app itself is quite standard, with multiple alarm options and lists. But it’s the cartoonish characters which makes it the best alarm clock app for android for kids. You set the alarm and select your favorite character. We liked the super chicken the best. And when the alarm rings you will be greeted with the character centric alarm sound, a dedicated screen and a great game. This way you will be awake and feeling light and happy.

AlarmMon comes with extensive alarm history which you can use to improve your morning habits and become a punctual person. 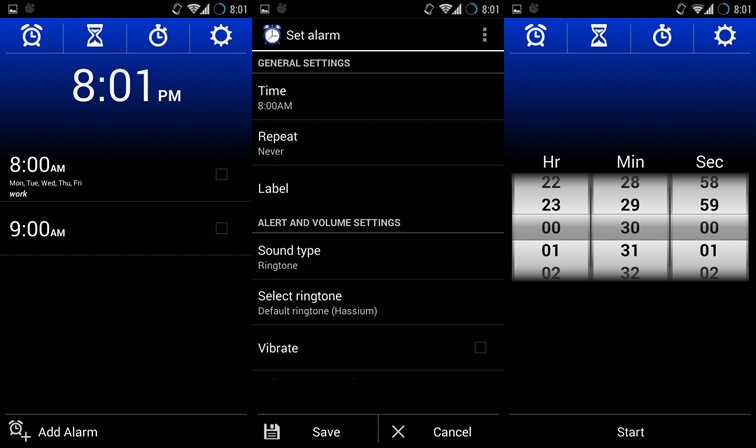 This ad supported free app is the best alarm clock app for android in terms of simplicity and straightforwardness. The simple design makes it one of the most fasted alarm apps around. There are extensive options on micromanaging your alarms. Want the alarm to be vigilant and wake you up after excessive snoozing? This app can do it. There are math problems in the app too which can be useful if you tend to stop the alarm and go back to sleep.

You can set the highest amount of snoozes you can get. This makes enjoying that “snooze nap” all the more rewarding yet less dangerous. 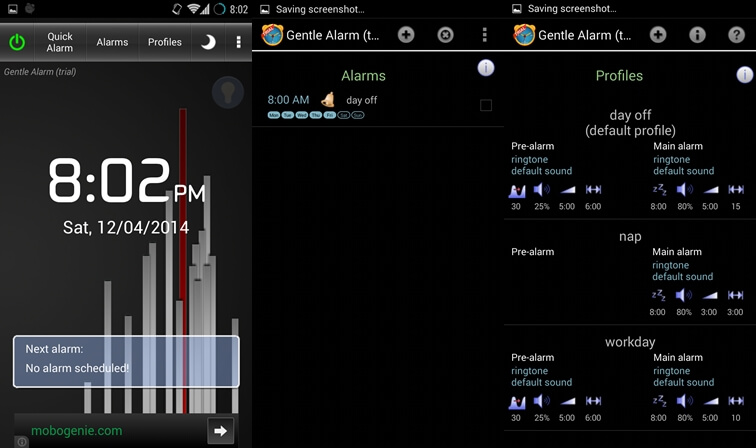 Gentle Alarm has it all, from good interface to incredibly detailed alarms. You can micromanage every aspect of the alarm in a very articulate way. But there is only one problem, this is a complicated app and will require a lot of time to manage. But if you love changing and customizing each aspect of an alarm, then this is the best alarm clock app for Android for you. You will absolutely love the high level of control provided by this app.

Many alarm clock apps rely on sounds to wake you up or alert you. What if you are in a meeting or Church? The alarm can disturb everyone. This is where the silent alarm comes into play. This feature doesn’t play a sound but increases in vibration.

The best alarm clock app for Android will be the one which wakes you up, this is what we said at the start of the article and this is what we will say here. You will have no use of fancy graphics and interface if you are late because the alarm was not good enough. Try a couple of these alarm apps yourself on the weekends, you know take em for a test drive. Then select the best on for you. Do tell us about the app you select and why, in the comments below.

WHAT NEXT: 10 Best Sleep Cycle App for Android to Snore in Style