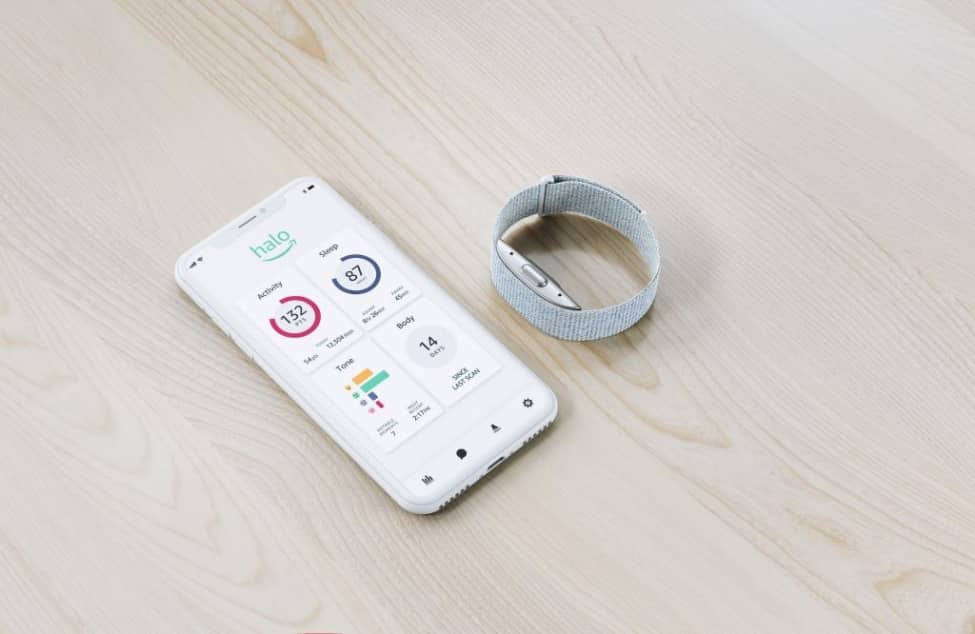 While people have been in quarantine these last months, fitness has become one of the top priorities. And how timely that Amazon has now launched a body fitness app and band!

Amazon’s Halo fitness is a new health service that offers a new take on health metrics. The fitness app and band don’t just tracks activities but it also analyzes your body fat using your phone’s camera and voice analysis to determine the emotional tone on your voice.

Getting in on the booming health and fitness business, Amazon’s Halo fitness is a subscription service that offers a plethora of health metrics such as tracking activities, sleep, body fat, and voice analysis (to determine how you sound toward others).

Amazon’s entry into the health and fitness world might be considered a little odd; not to mention ambitious. With Fitbit and Apple Watch already cementing its name in the market, can Halo fitness compete? We are unwrapping the wraps on this new fitness service.

The health and fitness market is dominated by the Apple Watch and devices from Fitbit. Amazon’s Halo fitness builds on older fitness tracking devices and integrates features that users don’t normally see on mainstream wearable devices.

Amazon has previously focused on in-home devices like Echo smart speakers and the Fire TV streaming video devices. Additionally, the company also showed off some wearable devices at its annual hardware show just last fall, which included a set of glasses with built-in access to voice assistant, Alexa, and wireless headphones. However, Halo is Amazon’s first legit shot into the fitness wearables market.

To start off, the band looks like a normal Fitbit tracker watch rather than an Apple Watch – but without a screen display. The band also features a few different elements such as temperature sensing (much like Fitbit Sense), and a microphone that regularly scans the user’s voice to determine its emotional tone.

The band comes in different styles, is water-resistant, and also comes in multiple sizes for both men and women. According to Halo VP, Melissa Cha, the company has paid special attention to this feature since many existing wearables feel overly clunky to many users.

Signs show that the Halo band will be more of a laid-back kind of tracker, lacking standard options like Wi-Fi, GPS, or a cellular radio. It has an accelerometer, a heart rate monitor, an LED indicator light, and a button which turns the microphone on/off.

But keep in mind, the microphones are not there for Alexa; rather, for the voice tone feature. Unfortunately, there’s no Alexa integration for the Halo band at this time.

And as to the app, the membership will start at $65 for the first six months, $100 once the early access deal is over, and then users will be paying $3.99 per month for the service. The subscription includes the basic fitness band (lacking a screen display); meaning, users will have to rely on their smartphones to see their data.

Probably one of the most amazing features about Amazon’s Halo fitness is the body fat analysis using only your device’s camera. Amazon thinks that body fat is a better predictor of health. Rather than relying on weight, Halo focuses on body fat percentage which is less volatile and takes a lot of work and time to change.

The gold standard in the medical world for body composition analysis is a DEXA scan, a dual-energy absorptiometry. One session in the lab can cost up to $100. But the Halo app does it all using only your smartphone camera.

What it does is analyze your photos, with the app automatically eliminating everything else in the background, and then calculates body fat percentage based on body indicators. The app then renders and creates a 3D model of your body. Moreover, the app requires you to only wear minimal, form-fitting clothing. The whole process takes only a few seconds.

If the thought of scanning your whole body makes you uncomfortable, you are not alone – especially in such awkward positions and with minimal clothing. That’s why, Amazon promises that the finished body scans will only remain on your smartphone. The images won’t be shared with anybody, not even the company, unless you opt in.

Another of its odd features is the Tone analysis. It analyzes the nuances in your voice to determine how you sound to others. For example, it can let you know whether you sound out of line toward another!

The built-in mics capture and listen for emotional cues. According to Amazon, the technology will only analyze the tone of your delivery and not the content of the conversation. If you opt in for this feature, you will need to take a series of speech samples throughout the day.

Simply tap the side button of your band to enable the microphones. An LED light will indicate whether the microphone is turned on or off.

While the features seem promising and innovative, the question with regards to user privacy remains. Sharing health data, let alone semi-nude photos, requires next-level trust. Are you prepared to give Amazon that kind of trust?

Amazon is totally putting the privacy in your hands by allowing you to opt out of the data sharing with both Amazon and third-party apps. Users will be given the choice to disable the microphones on the band.

Amazon is entering the fitness and health business that has been hugely dominated by Apple, Google and Fitbit. How will Amazon make a mark with its Halo fitness? Only time will tell.