Essential introduces a new smartphone with a unique design

To be honest, not many people own an Essential smartphone or even know about the existence of it. But despite that, it seems that it still has another trick up its sleeves.

It first released its smartphone line in 2017 which did not seem to earn that much praise. And now it seems that Essential is still financially solvent enough to release yet another smartphone.

Essential CEO Andy Rubin, the controversial mobile industry and Google former executive, shared the photos of the smartphone on Twitter. And by the looks of it, it is like something we have never seen before.

Nowadays, the trend for smartphones is “the bigger, the better.” But Essential’s newly unveiled smartphone is straying away from the trend. The photos shared appear to show an elongated smartphone with a very tall UI that is composed of card-like apps.

It features big buttons that look like they are perfect for smartwatches. Also, it is very small in the hands too. Think of a smartphone you see today, cut the design vertically in half and you are looking at the new Essential phone. 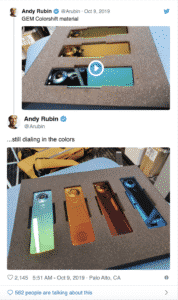 The device has a large button and volume buttons on the right edge as well as a fingerprint sensor at the back. Below is what appears to be a single main camera.

As you can see, the smartphone has some amazing and flashy color finish. It changes color when you see it from a different angle. For example, the sea green that shifts to yellow then blue at a different angle. 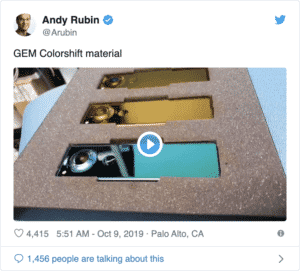 An Essential spokesperson confirmed to The Verge that the company will indeed be launching this new smartphone, “We’ve been working on a new device that’s now in early testing with our team outside the lab. We look forward to sharing more in the near future.”

New Essential phone has a ratio of a remote

Just a couple of hours after Andy Rubin posted the photos, Essential also took to Twitter to post some slightly more official images of the new phone, which by the way the company is calling Project Gem. 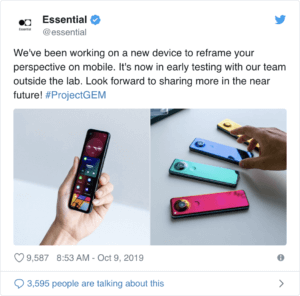 Noticeable from its design, Project Gem is a smartphone with an aspect ratio that of a TV remote. The color scheme definitely lives up to the “Gem” name, with four color finishes, each showing a different flashy and color-shifting finish.

The Essential phone does not look like any ordinary Android phone. In late 2018, Bloomberg reported that Essential is working on a phone with a smaller screen that can be controlled mostly through commands, as well as an AI assistant performing tasks for you. 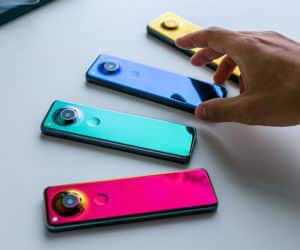 Essential’s new phone might be controlled mostly through commands

However, in December, Essential all but confirmed that it was working on a second phone. XDA-Developers also spotted some leaked codes and if that pans out, the Gem may activate its voice assistant with just a tap of the finger of the fingerprint divot around the back.

Also, they suggest that the Gem runs Android and a Qualcomm Snapdragon 730 processor, and with its midrange performance the device could really be more of s mobile companion than becoming the digital center of life.