Navigating has been a big part of many people’s lives. Whether it be navigating through life, or navigating your way to get to work. When it comes to the latter there is one trusty app that most rely on to – Google Maps.

Google Maps has helped many people navigate their way not just in foreign places but also in their turf. If you want to go somewhere by commuting, or by simply walking, the app has got your back. It tells the fastest route to get to your destination as well as the estimated time of travel.

And it is even more convenient that Google Maps is also available on mobile. So, whenever you feel like you are lost, just flick your phone then you can surely find your way.

As straightforward as the app is, some still find it hard to navigate their way. Thankfully, Google Maps integrates a new feature that makes it easier to get to your destination.

In the past weeks, Google has released a couple of impressive Google Maps features. These features include AR navigation support that is available to both Android and iOS, and a smarter way to plan your commute. However, Google still has a few tricks on its sleeves.

The tech company integrates Street View on Google Maps on Android for the time being. Street View is one of the best features of Google Maps that was only available on the desktop until now.

The Street View allows you to visualize the places you are navigating especially if it is your first time to this place and you are not familiar with the streets. On the web version of the app, you can quickly move between the Street View and the regular Maps view, which, unfortunately, is not possible on the mobile app. 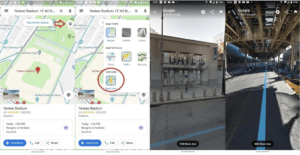 A standalone Street View app is available, but, it is more convenient to have all the useful features in one single app, right? The new layer is intuitive, showing you the streets where Google’s Street View cars have ventures with the same blue line that is used in the Google Maps web.

Street View layer is just a press of the finger

Simply tap where you want to go, then you will be brought to Street View. Furthermore, you will also see restaurants and shops that are along the way. It is just like the desktop experience but only far more convenient.

The feature is currently rolling out to Android. So, if you haven’t had it yet, it will find its way to you. Also, the feature will soon be available to iOS, so Apple users out there won’t need to worry at all.