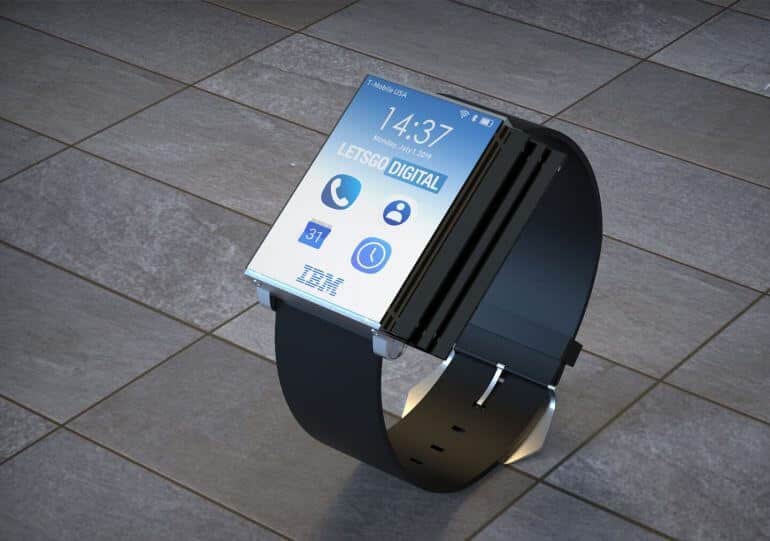 It is not just smartphones, tablets and computers are what people look forward to every year. A smartwatch is a piece of gadget that many are starting to invest into. And when it comes to smartwatches, Samsung and Apple are the popular ones to come in mind.

But you might change your mind when you see what IBM has been up to. IBM has patented a smartwatch design that will expand to become a smartphone on your wrist, then expand it even bigger, if needed, to become a tablet that is strapped on your wrist.

IBM’s smartwatch that expands to a smartphone then tablet

IBM has filed a foldable display on its smartwatch back in 2016. And with the patent’s recent publication by the USPTO, we can finally get an idea of what it really looks like. And I tell you, the design is out of this world – well, at least for a smartwatch.

As spotted by the folks over at Let’s Go Digital, the patent covers a wearable device that has a total of eight unfolding displays. All them measuring at 2 x 3 inches. In most smartwatches that there is today, you can only see one of those display.

The Dutch tech news site has done a couple of renders based on the information from the patent. As you noticed, since the watch folds multiple times, the body looks bulkier than most wearables out there.

One thing to note though, is that the smartwatch does not have that much bezels. Which means, you will really enjoy the wide display when you want to unfold it to a smartphone or tablet configurations.

Adding three more displays would give you a 4-inch wide by 6-inch tall screen that consists of four parts. But if you add in the four remaining screen, you will get an impressive 8 x 12 inches of display strapped on your wrist, complete with yet another interface for the tablet configuration.

Smartphone or tablet in a wearable? Why not both!

When you first take a look at IBM’s patent design, it is pretty crazy, right? But so are the foldable smartphones, which already has become the trend today. So, there is no reason why this smartwatch won’t come to light.

Despite pretty impressive design renders of the smartwatch, it does not really go into detail on how the displays would unfold or expand. There is too much mystery surrounding on how the smartwatch would function. Finally, based on the renders by Let’s Go Digital, the gadget looks like a pretty fragile device because of the added display.

It is exciting to see on how this smartwatch will be translated to be offered to everyday consumers. If IBM or other manufacturers will want to try their hands on this smartwatch, then they are all welcome to. It won’t be long before consumers will start wearing a smartwatch that expands to a smartphone or a tablet.