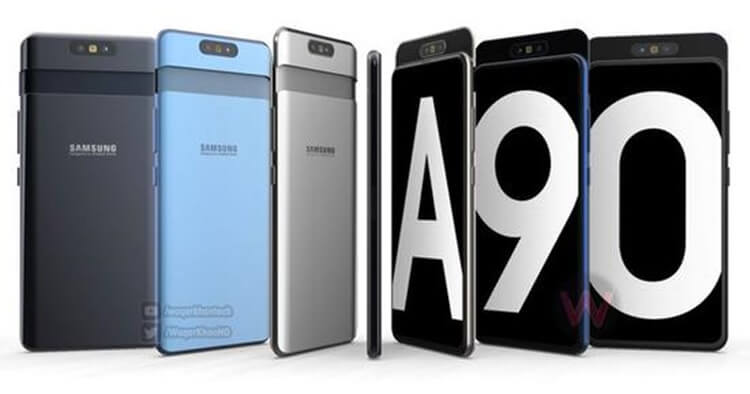 This April 10 is Samsung’s much awaited “A Galaxy” launch event, where the company is going to be taking off the wraps on the new Galaxy A90. But ahead of its official debut, render video and specs leak of the device has already circulated online.

It is not very uncommon for leaks of upcoming smartphones to arise. Whether these leaks are accurate, that is not always the case. But in most situations, they always paint the picture of how a device might look like.

In a concept video that recently circulated online, the smartphone will feature a triple sliding and rotating camera design The slider mechanism is definitely something Samsung fans can look forward to.

Initially, posted on OnLeaks‘ Twitter page is a speculation that suggest that the Galaxy A90 will feature a rotating camera module.

As already mentioned, the Galaxy A90 is rumored to have a sliding camera module. This means that it will not have a separate sensor for taking selfies.

This device will likely use an octa-core SDM7150 processor paired with multiple storage and RAM configurations, in which we do not have any specifics yet.

And as far as the display goes, the Galaxy A90 will boast a massive 6.7-inch AMOLED display with a 1080 x 2400 pixels HD+ resolution. It has the exact display specs of the recently launched Galaxy A70.

But unlike the A70, the Galaxy A90 will have a notch-less, infinity display screen giving way to a much bigger screen. And this is made possible by the sliding camera design.

Finally and surprisingly though, the leak claims that this device will only have 3700mAh battery capacity with 25W fast-charging support, which is kind of disappointing.

Galaxy A90 Is The First Snapdragon 7150-Powered Smartphone

Based on a latest leak, the Galaxy A90 will reportedly sport the unannounced Snapdragon 7150 chipset. If these data are accurate, the Snapdragon 7150 will be Qualcomm’s next generation mid-range chipset.

This will also be the successor chipset of last year’s Snapdragon 710. Aside from all those, there are no other details yet regarding the chipset.

Is The Galaxy A90 The Next-Generation Mid-Range Flagship From Samsung?

Until then, Samsung fans will have to wait for the curtains to open on its “A Galaxy” launch event this April 10. We will see how much of the rumors above are actually true.