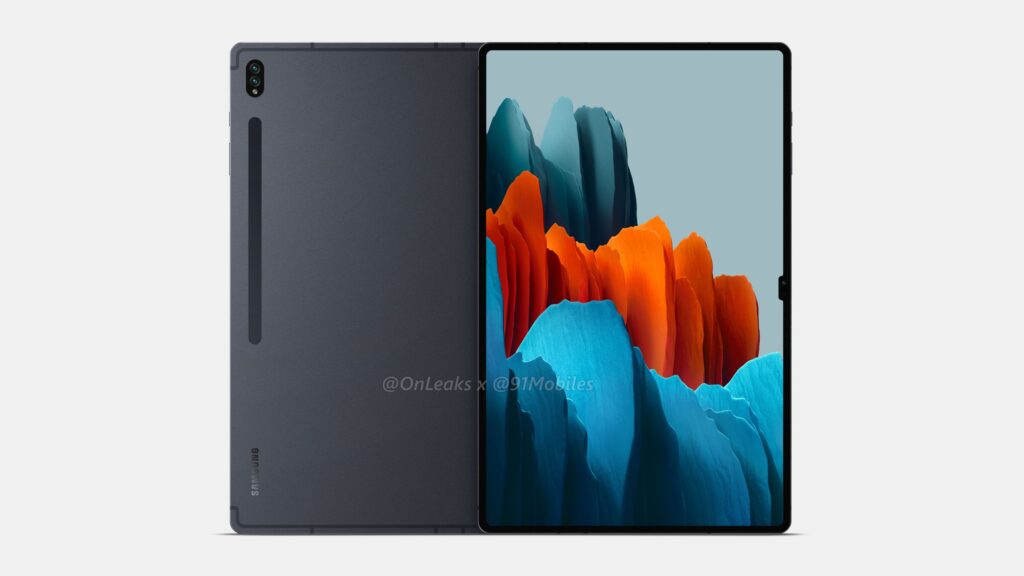 We are all expecting the Samsung Galaxy Tab S8 to break its cover sometime early next year. However, over the last few days, we have gotten pretty much a good idea of how the device will look like.

For the eighth generation Galaxy Tab line, there are three models in the works. Last year, we were only offered the Galaxy Tab S7 and Galaxy Tab S7 Plus, however, there now seems to be an Ultra Edition too.

There’s no doubt that the renders leaked are giving its loyal fans a glimpse. Also, the renders include the unofficial renders of the Tab S8 Ultra Edition.

Galaxy Tab S8 Ultra –– what is the device going to look like?

Thanks to the folks from 91Mobiles and @OnLeaks, we’ve got a detailed look at the biggest and most expensive Tab S8 tablet. Although design-wise, the Tab S8 Ultra is as premium as it can get, but it has introduced us to something a bit more divisive.

For the first time in the series’ history, Samsung has decided to put a display notch. The notch appears to be at the top of the screen when the device is held in landscape mode.

The Galaxy Tab S8 Ultra is said to feature a huge screen of 14.6 inches and the notch, which houses the selfie camera, is relatively thinner. Yet, it is still annoying to see a little notch on what you thought to be an infinite screen display.

Apple’s iPhones include a notch for the advanced facial recognition hardware required for the Face ID function, that is not the case for the Galaxy Tab S8 Ultra. To put it simply, there is not enough room in the bezel to house the selfie camera compared to the previous models.

And apparently, both Tab S8 and Tab S8 Plus will unlikely to feature a notch and it looks like only the Tab S8 Ultra will have one. Obviously, Samsung is prioritizing to offer a huge screen.

Nonetheless, it is surprising to see why Samsung did not go for the pinhole camera similar to Galaxy S21 phones.

The renders also reveal other aspects of the design of the upcoming Galaxy Tab S8 Ultra.

The device is said to feature four speakers and a USB-C port, however, don’t expect to see a headphone jack there. The back design is pretty much conventional with dual rear cameras and also expect a magnetic strip to hold the S pen.

The S Pen is one of the major features expected on this device –– the 14.6-inch screen display is very suitable for creating digital art and whatnot.

Furthermore, the site states that the designs are “not 100% complete.” So, we can expect changes by the time this device will officially launch. The report also says that the three tablets will arrive in November or December.

But, according to IceUniverse –– another well-known leaker –– the devices will be expected next year together with the Galaxy S22.