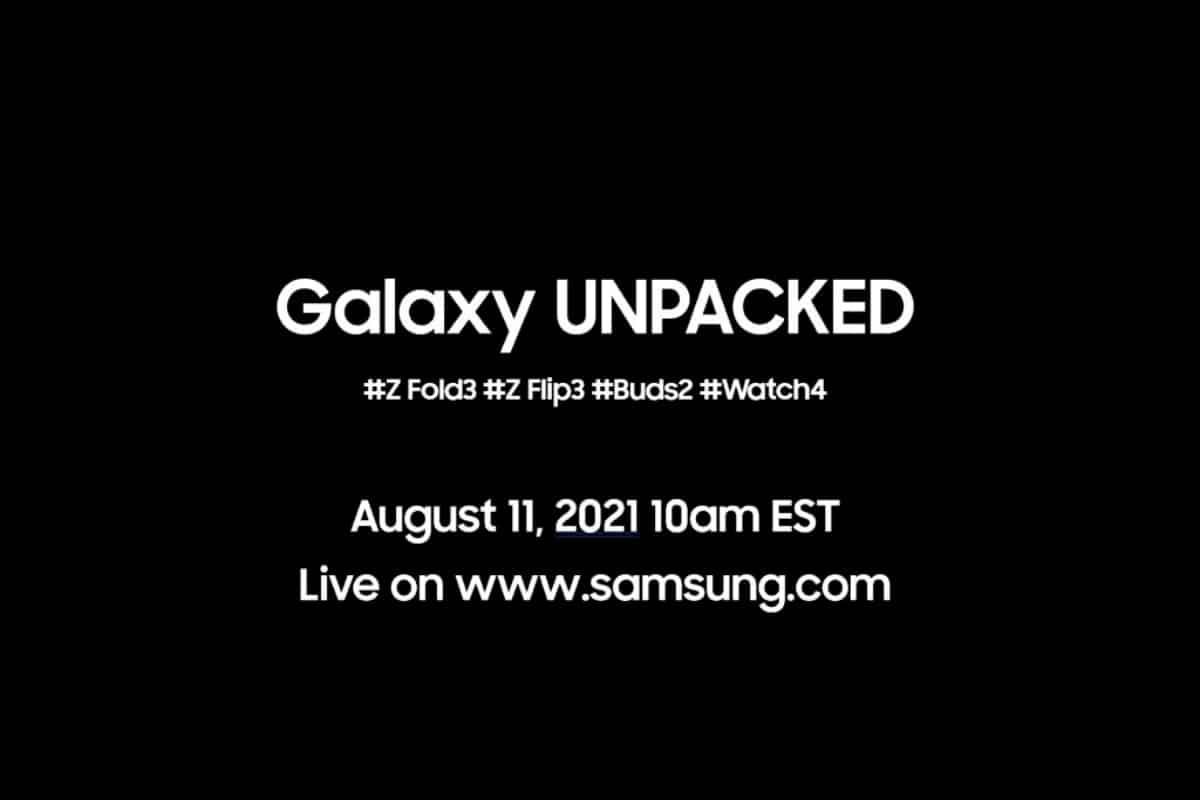 “Get ready to unfold.”

After tons of leaks and rumors, Samsung has officially announced its Unpacked event.

The much-awaited event will be happening virtually this coming Wednesday, 11th of August, at 10 A.M. ET/7 A.M. PT.

Invites for the next Unpacked event have already been sent out to the media.

Meanwhile, Samsung did not specifically mention any devices it plans to launch; however, recent leaks and the obvious tagline for the event say it all.

To many, it is clear what Samsung’s talking points will be for this Unpacked event –– its next-generation foldable devices.

Leaks and rumors of the Galaxy Z Fold 3 and Galaxy Z Flip 3 have been in the mill for quite some time now.

That is why it is widely expected that both of these devices will be the center attractions in its next Unpacked event.

More so, Samsung’s invite reveals the outline for both of those devices and basically what we can expect.

The Galaxy Z Fold 3 will reportedly feature a large foldable display, measuring 7.6-inches across. Additionally, it will sport built-in stylus support –– this means it will be fit even for high-end power users that look for a mixture of tablet and a big-screen phone.

On the other hand, the Galaxy Z Flip 3 will feature smaller dimensions and probably a lower retail price too. It looks like the Z Flip 3 is positioned for mainstream end-users looking for something a bit more compact.

Users of the Galaxy Z Flip 3 will definitely get the best of both worlds –– an old-school flip phone design but with some next-generation specs.

Samsung has made some improvements over its previous Galaxy Fold devices with the inclusion of stylus support. It suggests that Samsung has created a new type of flexible display that can resist repeated impact from a stylus.

Previous Galaxy Z Fold and Z Flip phones feature a layer of “ultrathin glass.” Unfortunately, that glass did not offer anywhere near the same kind of durability you will get from traditional phones. Users can easily break those folding screens even with just their fingernails.

But now, Samsung hints that it is increasing its durability with rumors of lower retail prices for both Galaxy Fold 3 and Galaxy Flip 3.

Samsung will also be releasing the new Galaxy Watch 4

Additionally, the Galaxy Watch 4 is said to feature Samsung’s new One UI Watch –– this is based on Google’s Wear OS instead of Samsung’s Tizen OS.

The smartwatch will retain its circular display and handy side buttons but it is expected to be available in three sizes.

New and enhanced features are also expected to feature on the Galaxy Watch 4 such as updated health tracking with advanced metrics for sleep, VO2 Max, Spo2, continuous heart rate monitoring, and more.

Finally, fans can also expect the announcement of the Galaxy Buds 2 which will feature a noise-canceling feature and will have a price tag of around $100.

Unfortunately, we won’t be seeing any of the Galaxy Note at this Unpacked event.

The device has long been rumored to be skipping a generation. because of the lack of available parts caused by the global chip crisis.