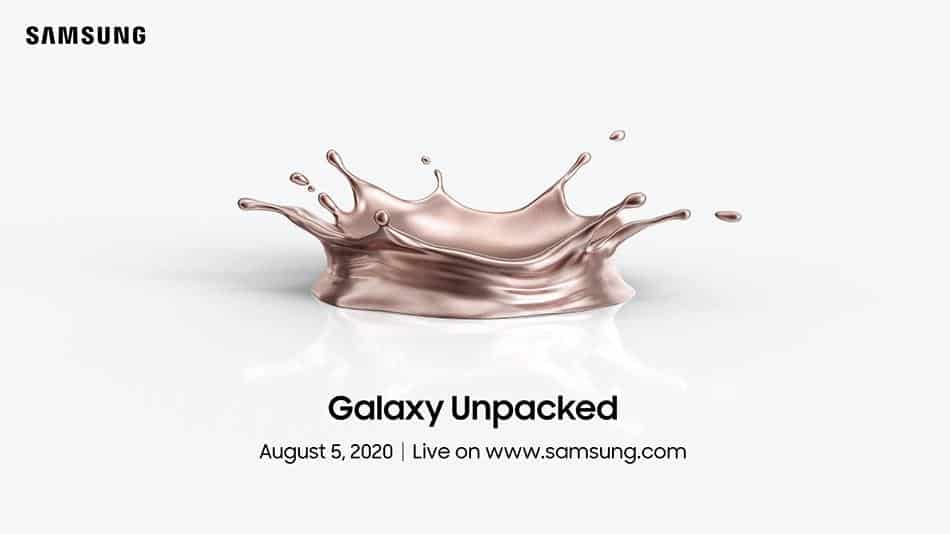 Since the start of the coronavirus outbreak, mass gatherings have been strictly prohibited. Many tech events were postponed and canceled to adhere to this guideline.

However, business as usual for many tech companies. That’s why Samsung announces its Unpacked event with public safety in mind – taking its stage virtually. Also, the South Korean company will officially announce its new flagship smartphones in the event too.

Samsung has announced on Tuesday that it will host its Unpacked event online at 10 a.m. ET/7 a.m. PT at www.samsung.com.

The unveiling of its newest devices

During the event, Samsung is expected to be unveiling its newest devices – Note 20, Galaxy Fold 2, and Galaxy Z Flip.

The company’s teaser is pretty cryptic, although the copper color splash does match the leaked images of the Galaxy Note 20 Ultra – the rumored flagship of the lineup – which were accidentally posted on Samsung’s Russian website at the beginning of July.

This new flagship is rumored to feature a triple rear camera array which includes a periscope-style lens, along with a 4th sensor that appears to either a 3D ToF or laser autofocus.

Galaxy Note 20 Ultra is expected to sport Qualcomm’s Snapdragon 865 – or possibly even the rumored Snapdragon 865 Plus which are expected this month. The latter will then make 5G the default for the new Notes in addition to a 120Hz refresh rate display option.

And let’s not forget the S-Pen – which potentially could have a few tricks.

Additionally, two Galaxy Note 20 models are expected next month – a smaller Galaxy Note 20, and the larger Note 20 Ultra. But, there are no further details as to its differences aside from its size.

Joining in the fleet of smartphones is the follow-up to the Galaxy Fold – reportedly named the Galaxy Z Fold 2. This smartphone is also to join the branding of Samsung’s Galaxy Z Flip lineup.

The device is rumored to feature a larger internal 7.7-inch screen display. In addition to that is a possible cut-out camera the same as Samsung’s other flagship phones. Expectedly, specs are getting a boost although there are no specifics to that yet.

Lastly, the event could see the announcement of the Galaxy Z Flip 5G. The device has already been revealed courtesy of China’s TENAA certification center. In fact, there have already been leaks about the device.

Galaxy Z Flip is reportedly going to come with a Snapdragon 865 Plus chipset and a slight drop in overall battery capacity compared to the LTE version.

The coronavirus outbreak has forced many companies to take a step back with their product launches, making them rethink new ways to do so without jeopardizing anyone’s health. Early this year, Mobile World Congress was canceled due to the coronavirus.

And now, companies have taken their product launches into the digital platform. With many of the things about the upcoming devices remain to be unknown, hopefully, everything will be announced during the Unpacked event.