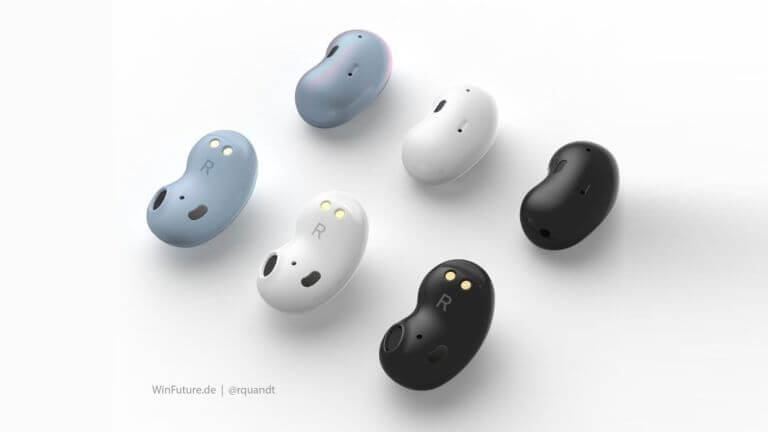 It was just last month when Samsung released the upgraded Galaxy Buds+. The wireless earbuds offer amazing battery life and improved sound quality in a practically identical form from its predecessor.

Now, a new report from WinFuture has circulated that Samsung will be releasing to be believed as the company’s next-generation true wireless earbuds in a new design, no one has ever seen before.

And the greatest news of all?

This pair will come with one of the most coveted features – active noise cancellation.

Read: Best Android Headphones, Earphones, and Earbuds on the Market

Samsung only just launched the Galaxy Buds+ and immediately the rumor mill suggests that the South Korean phone manufacturer will be launching a follow-up device – Galaxy Buds 2.

According to the renders WinFuture has put together of the Galaxy Buds 2, the pair is unsurprisingly code-named “beans”, due to its unique design.

The name Galaxy Buds 2 is only tentative, but other options include it to be named Galaxy Beans.

The kidney-shaped earbuds are around 2.8cm in length. The speaker hole and sensor in the part that sits closest to your ear canal, microphones and vents are on the outside.

In addition, it features magnetic pin connectors for charging that can be found on the side that sits against the ear. Since it has not been officially launched yet, battery size and other specifications are yet to be known.

Looking at the design it seems like impossible due to its bizarre design – they just don’t look like they would stay in the ears, don’t they?

Apparently, Samsung is already in the testing phase of development for this new device.

An ‘active noise cancellation’ feature for the new wireless earbuds

According to a report from South Korean website m-i.kr, Samsung Galaxy Buds 2 will feature an ‘Active Noise Cancellation’ feature and offers 11 hours of battery life.

However, these claims are very surprising. There is not a pair of wireless earphones/earbuds that won’t cost you at least $200. And the active noise cancellation is a premium feature.

Cheaper wireless earphones don’t usually come with that feature. If they do, it’s not as efficient as those premium ones.

The cheapest earbuds available is Amazon’s Echo Buds priced at $130. It features Bose’s active noise reduction (ANR) technology, however, it is not considered as effective as full ANC.

If Samsung is able to offer full ANC for just $10 more than the Echo Buds, but over $100 less than Apple’s AirPods Pro, then that would be a huge milestone.

Much could still change before this device would be available in the market, or they could be canceled entirely, that we don’t know. But it seems that Samsung is pretty much serious about this.

We can expect more leaks to come out soon and more likely will shed more light.

Furthermore, the Galaxy Buds 2 will probably be released alongside the Galaxy Note 20 in August of this year.